Kefalonia is a wonderful Greek island on the West Side of Greece, which features amazing beaches and nature. It also well known for its culinary experiences and the special attitude of its people. Inhabitants of Kefalonia, are considered to be the “craziest” of Greeks, as they are cheerful, unexpectedly helpful and full of passion and energy.

We put together a list of the top things to do, see and experience in this fantastic island, so that we help you have a better experience when you visit it. Enjoy! 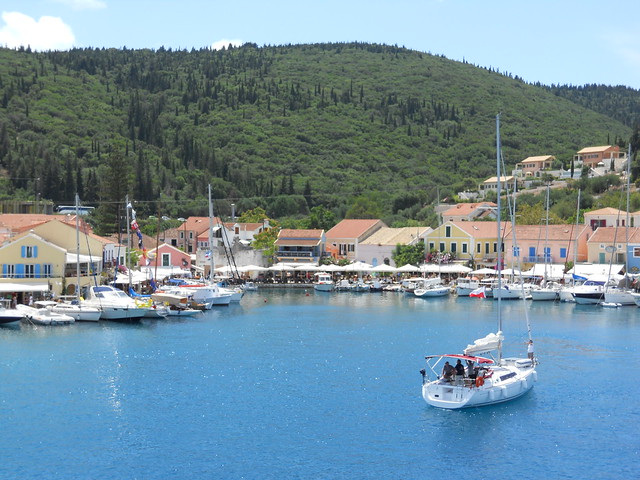 Fiskardo is a small village on the north side of the Island. It is built with Italian style houses, full of colors and charm. Fiskardo is the best place for sailers and yacht owners to have a stop and enjoy the local cuisine and a walk in the night, so you will see many mega-yachts and sailboats in its safe harbor. Armani, is usually bringing his amazing yacht at Fiskardo every year, so don’t be surprised if you find yourself eating next to him.

If you go at Fiskardo, the most well-known place to have a dinner, is at “Tasia’s” restaurant, which has tables on the harbor and you can enjoy great greek dishes, while looking at the most awe-inspiring view. We have tried that. The food is great, although quite expensive, so it is not the best value for money restaurant in the island, however it is a nice experience to spend a couple of hours there, due to its privileged position. It has become quite trendy in Greece, due to the fact that a lot of celebrities go there (have a look at http://www.tassia.gr/celebrities/) and Tasia has also a TV Show about cooking in the Greek television.

Below you can have a look at how Tassia’s Restaurant look like in the evening (the harbor is 5 meters on the right of the restaurant, so it is on the sea). 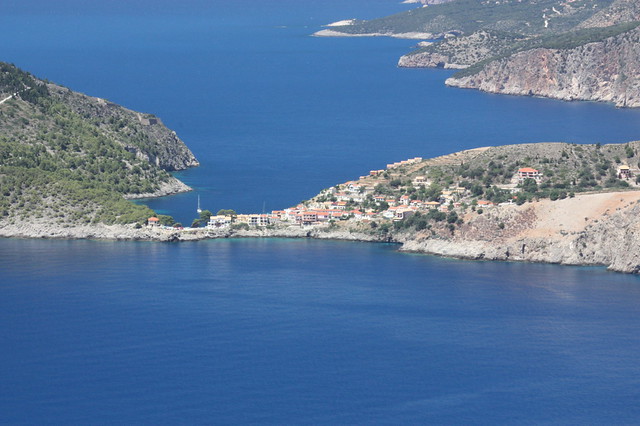 A little gem village with colorful small houses, in the middle of nowhere in the island. You can swim inside the village and next to the tavernas and the houses and enjoy amazing views and food. Don’t miss a visit to Assos village if you are in Kefalonia.

Here is where you will be swimming at: 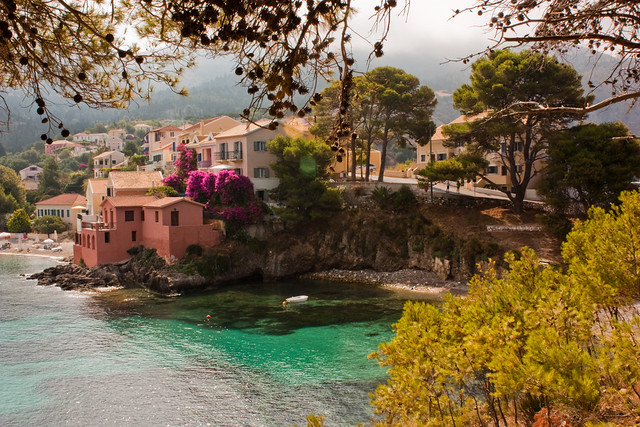 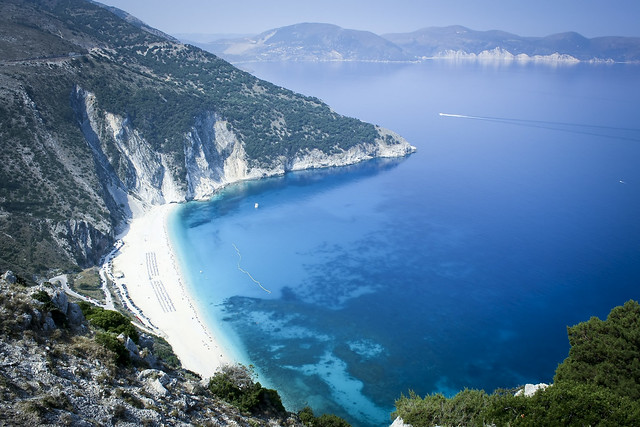 Myrtos Beach is one of the top beaches in Greece, featured in many traveler’s magazines and usually listed in the top 10 beaches worldwide. It is quite difficult to go there as it is situated in the middle of the island and you have to drive 30 kms from the main town of Kefalonia, with the road leading inside the mountains of the island. But when you reach the beach, you will find yourself in a perfect white sand and light blue waters.

Please be careful with Myrtos Beach! It has strong currents and if there is wind, it is very easy to be pulled by the sea. A couple of visitors every year have serious problems every year, so don’t underestimate the sea at Myrtos. Moreover, there are not that many umbrellas on the beach, so you have to go early in the morning, otherwise, you will not be able to withstand the hot sun and its reflection on the white sand. Also, behind the sea there is a big mountain, so don’t sit in a place where a stone could fall and hurt you. Not that it happens frequently but better be safe than sorry.

Moreover, Kefalonia has been hit by an earthquake in 2014 and the road to Myrtos beach has had some issues but it is now being fixed.

Myrtos Beach – Problems with the Road

The earthquake has also changed for a couple of months the beach of Myrtos, with a lot of sand falling into it from the mountain. Have a look below at the photo: 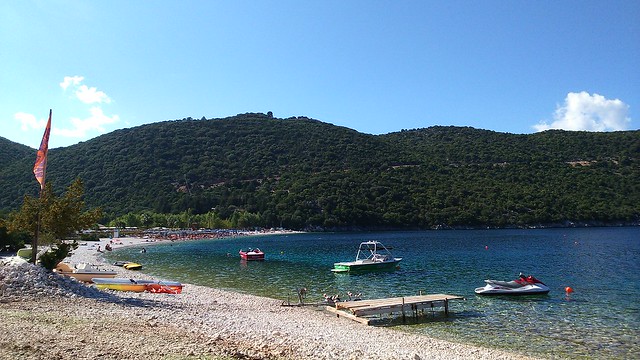 Antisamos beach is another famous beach of Kefalonia Island. A hollywood movie “Coreli’s Mantoline” has been shoot here. You need to drive 20kms from Argostoli, the main town of Kefalonia and you will get into a place full of green hills and really crystl clear blue waters. There are two beach bars on the beach and you have to get there early in the morning (around 10:00 AM), to be sure you get an umbrella and a nice spot on the beach. The only strange thing with the beach is that it has many small fishes that make light bites to you while you are swimming. No, they are not dangerous but sometimes they are annoying.

Agios Thomas Beach as it is called in Greek (St Thomas Beach), is not that well known to the tourists of the island of Kefalonia. It is a really amazing small beach with 20-30 umbrellas and perfect blue and shallow waters. It is close to the small village of Karavados and it doesn’t have important facilities. Just a couple of greek tavernas next to eat, where you could get a coffee and have a lunch after swimming at its warm waters.

6. Go to Lixouri and Swim in its Strange Waters 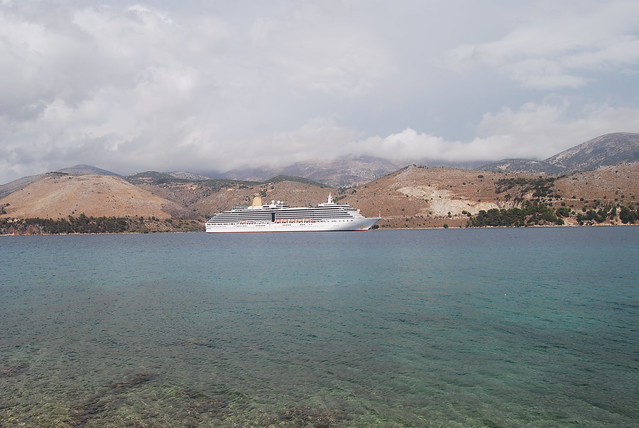 To go to Lixouri, you need a boat from Argostoli village, so that you don’t have to drive the whole island. It has a nice beach, although not the best in the island of Kefalonia. The interesting thing is that this beach is a little bit like the Dead Sea – you can get its sand and make a full-body scrub, as it’s full of healing metals. So, if you are into that, pay a visit to Lixouri.

7. Dance Greek dances in the central square of Argostoli

Argostoli is the main town of Kefalonia. It is not the most beautiful town/village of Kefalonia, however it has a nice central square and you will often find greek dance shows taking place in it. Have a stroll, enjoy an ice-cream and join the dances if you feel like it! Although you will find it a little bit “touristic” to dance, people in Kefalonia will make you feel really welcomed and eager to join them.

8. Go to the Mellisanthi Cave of Kefalonia

According to the Greek Mythology, Mellisanthi was a small girl that was a Sheppard and while looking for a lost sheep, lost her balance and fell into the blue waters of this cave and lost her life. So, the cave has been named “Mellisani Cave”. Another story from Mythology, says that Mellisanthi was in love with Panas, the God of Love, but he didn’t respond to her feelings. So, she committed suicide by jumping in this cave-lake.

The lake of Mellisani, is an underground lake that has been found just in 1951 and is situated at Karavomylos village, a little bit outside from Sami’s village. A big part of the roof of the cave has fallen, so you get an amazing view while you are inside the cave.

This is what you will see when you will be inside the cave (look how the sun get’s inside, from the fallen roof of the cave of Mellisani). 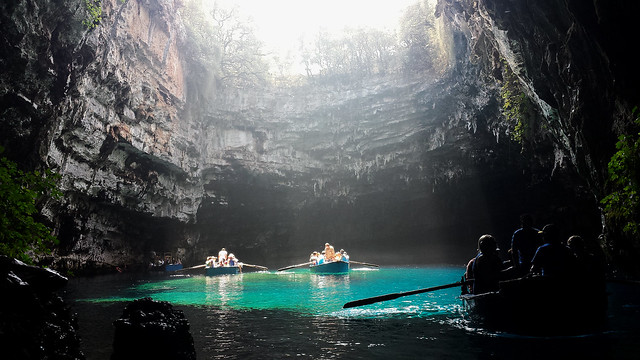 Platis Gialos beach is the mainstream beach of Kefalonia. It is the closest to Argostoli, the main town of Kefalonia village, so it gets really crowded every day. It has warm, blue and swallow waters, with a lot of beach facilities. It is a great place to relax, if you don’t feel like driving many kms to get to the other beaches of Kefalonia.

Kefalonia used to  produce wine since the ancient time. There is a tradition that the first vineyard was planted by “Kefalos”, the ancient god the island got its name from. The wine has played an important role to the economy of the island. The best wine that the island produces is the “Robola”. Kefalonia used to belong to Venice (Enetoi), when Venice was an empire and the people of Venice where calling Robola, a “Vino di Dasso”, which means a wine from the stone. Robola wine is mainly produced in the place of the island that is called “Omala”, in the middle of Kefalonia and it has flavors of apple and citrus. Moreover, other well known wines of Kefalonia that you could try are “Mavrodafni”, “Vostilidi”, “Tsaousi” and “Moshato”.

Regarding sweets, Kefalonia is well-know in Greece for producing a sweet that is called “Mantoles”. They are really tasteful – don’t miss trying them out!